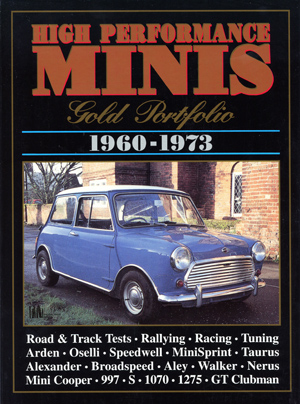 When Alec Issigonis designed the Mini, his primary aim was to produce a small and economical car which was big enough to transport the typical nuclear family. So remarkable did the roadholding and handling of this essentially practical creation prove, however, that it was not long before BMC's engineers and others decided to turn it into a sporting machine. As this collection of articles demonstrated, BMC, were not first off the mark with the hot Mini; that honour went to an aftermarket tuner. But to most people, the archetyicpal hot Mini was and always will be the factory's own Cooper version, which left such a lasting impression that the Rover Group (who then owned what had been BMC) introduced an updated Mini Cooper in the 1990s, three decades after the original had been announced. One of the Mini's greatest strengths has always been that it is an affordable car. Enthusiasts can tune it to a quite remarkable degree without breaking the bank, and equally without too much fear of breaking the car. Those qualities are what lay behind all the high performance versions covered in this collection of articles, and the same qualities still persuade today’s enthusiasts to enjoy Minis to the full. Models include: 997cc, Arden, Aley, Twin-carb 850, Speedwell, Alexander, Toucan, Radford, Nerus, Cooper S & 1275, GT, Twini, Taurus, Speedwell, Radford De Ville, Broadspeed & GT 2+2, Walker GTS, Janspeed, Cox GTM, Unipower & Oselli. 172 pages, 400 illus. SB.

The first article reproduced in this book is

A worthy addition to the Haynes Great Cars Series,