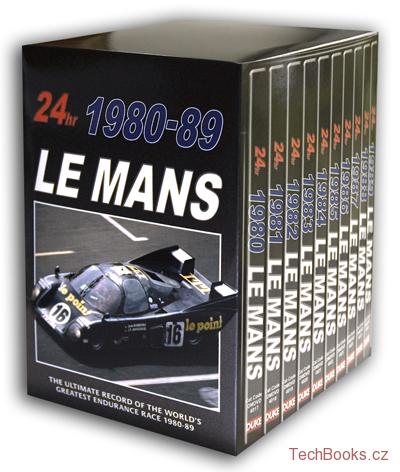 'Sportscar fans are in for a real treat here......hold on tight, Porsche 956/962, Jaguar XJR and Sauber-Mercedes fans' Autosport

This is the complete collection of reviews of every Le Mans 24 Hours race of the 1980s, now on DVD.

This box set contains 10 discs boasting more than nine hours of fast and furious race action from a golden era of sportscar competition.

All the classic encounters, awesome machines and driving legends of the '80s are here.

Although these films are form the very early days of motorsport review videos, the excellent camerawork - including plenty of in-car footage - and informed commentary bring you all the action, drama and excitement that makes Le Mans such an exceptional event.

There's also interviews with the stars, and a real flavour of the colour and atmosphere Le Mans is famous for.

Relive the exploits of Jacky Ickx, Derek Bell, Jochen Mass, Martin Brundle, Al Holbert and many, many more in the ultimate record of a decade of incredible racing.

Each year is also available individually.

THIS CONVERSATION COULD BE CONSIDERED THE START OF

For over fifty years the great marques of motoring