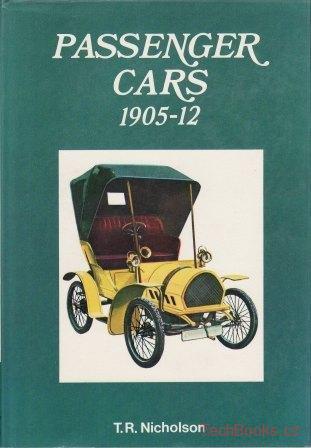 Passenger Cars 19054 2, the fourth book in the "Blandford Cars of the World in Colour" series, is a com-panion volume to Passenger Cars 7863-1904. This new volume picks up the story at the time when the motor car can be said to have taken on an in-dependent identity. The "settling-in" period covered was one of rationalisa-tion, simplification and the beginnings of mass production, and saw the intro-duction of refinements such as silence, smoothness and flexibility, and feat-ures of comfort and luxury for dignified travel at the new cruising speeds of up to 40 m.p.h. This was the age of the "Doctor's coupe" and prestige motoring, and of the six-cylinder car, notably (in Britain) the Rolls Royce 40/50 and the Napier. It can be summed up in the author's words as "an important transitional period between the fascinating tech-nological anarchy of the previous age and the conformity of the next, illum-ined not so much by the technical interest of the vehicles themselves as by the historic importance of the methods used to produce and sell them and the effects of their first massed invasion of society". Mr. Nicholson, a notable writer on the history of the motor car, describes authoritatively every car illustrated in the 96 pages of colour. An historical introduction is included, which incor-porates some black-and-white detailed technical drawings of some of the cars. A full Index completes this valuable addition to the series, which is already established as a standard reference.