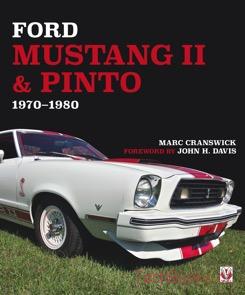 The history of Fords first American-designed and built subcompacts. Following the Mustang II and Pinto through a challenging decade, as they competed with domestic and imported rivals in the showroom, and on the racetrack. This book examines icons of the custom car and racing scene, as Ford took Total Performance into a new era.

The story of Fords original, home-grown small cars, the Mustang II and Pinto. Follow their progress through a difficult decade when Henry took on the imports, battled bureaucracy and gave America the economy and sports luxury subcompacts they wanted.
This book details the successful design, building and sale of these small American Fords that faced domestic and foreign rivals. Mustang II and Pinto went through many permutations, appearance and performance packages  options that have helped the cars become collectible classics, and are prime examples of the decade the pony car survived.
Going beyond stock standard were the customizers and racers that pushed the cars and their designs to the limit. Mustang II and Pinto graced enthusiast car magazine covers, and became stars in TV and films. They were small cars that made a big impact, and kept the Mustang galloping.
Marc Cranswick draws on his lifelong passion for iconic American cars and this book delivers another unique insight into these models. His other books include Ford Midsize Muscle  Fairlane, Torino & Ranchero; MOPAR Muscle  Barracuda, Dart & Valiant; and Pontiac Firebird  The Auto-Biography.

Read the exciting story of some of America's

It took a while for buyers to get used to the