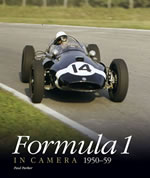 Building on the success of Haynes's three previous Formula 1 titles in this series, which cover the 1960s, 1970s and 1980s, this book takes a nostalgic look at the 1950s. Offering the same combination of informative text, race statistics and glorious photography, much of it in colour, it brings alive the heroic era of Juan Manuel Fangio, Stirling Moss, Alberto Ascari, Froilan Gonzalez, Peter Collins and Mike Hawthorn. For many fans, this was the era when Formula 1 was at its peak - thrilling and dangerous, but still a sport.

Cena pro Vás 3 800 KČ
1982: The Inside Story of the Sensational Grand Prix Season

The extraordinary events of the 1982 Formula One

This long-standing reference work is rightly

Now firmly established in its seventh year of